You are here: Home » Articles » Latest Articles » Does the iPhone 6 actually have console-quality graphics?

Over the last few years, there has been a steadily growing refrain from device makers and game developers that mobile devices — smartphones, tablets, portables – have processing power and graphics capabilities that are approaching that of game consoles. This bold assertion began in 2012 with Nvidia saying its mobile GPUs would soon overtake the Xbox 360, and with Apple saying its iPhone 5 has “console-quality graphics” — and by 2013 the PS Vita had indeed caught up with the PS3. Now, however, the head of EA’s mobile division, Frank Gibeau, has made a very interesting statement indeed: He says that the iPhone 6, with its “improved processor” is “on par” with the Xbox One and PS4.

Is it really possible for a battery-powered device that’s 7mm thick to have comparable CPU and GPU performance to next-generation consoles that are still less than a year old, or is the head of EA Mobile a little bit deluded?

Sadly, even the iPhone is still beholden to the laws of physics

When it comes to raw computing or graphical performance, there are three main factors to consider: The technical proficiency of the chip designer, the size of the chip (i.e. the transistor count), and the chip’s power envelope (wattage, TDP). In other words, if you have the same AMD-designed GPU with 1 billion transistors, but one chip has a 5W TDP and the other has a 20W TDP, it’s fairly safe to assume that the 20W TDP chip will be (significantly) more powerful. Likewise, one CPU with 2 billion transistors is probably going to be a lot more powerful than a CPU with 1 billion transistors, assuming they were designed by two comparable teams. This is a gross simplification that ignores other important factors, but it will serve us well without having to dive much deeper than necessary. Now, let’s take a look at the hardware inside the iPhone 6. The new A8 SoC — at least as far as we know, as Apple hasn’t released the exact specs — has a dual-core Cyclone CPU and hexa-core PowerVR Series6XT GPU. All told, the chip consists of around 2 billion transistors, built using a 20nm process on a tiny 89-square-millimeter die. We don’t know the exact power envelope, but generally the TDP limit for a smartphone form factor is in the 3-4W range. The A7′s predecessor had a GPU capable of 115 gigaflops; the A8′s GPU, which Apple says is 50% more powerful, should therefore be capable of around 172.5 gigaflops. For more details, read our A8 SoC explainer.

Compare this to the PS4′s APU, built by AMD, which features an octa-core Jaguar CPU and a 20-core HD 7870 GPU (only 18 of them are active, however). The total die size of the PS4 APU, on a 28nm process, is 328 square millimeters. I don’t think the exact transistor count has ever been revealed, but it’s probably around 4 to 5 billion. The PS4′s GPU is capable of 1.84 teraflops (1,840 gigaflops). The entire system draws around 140 watts at full load — most of which is the APU. For more details, read our detailed PS4 APU analysis.

You can probably see where this is going.

In terms of raw GPU power, the PS4 has somewhere in the region of 10 times more power than the iPhone 6. The iPhone’s Cyclone CPU cores are probably quite similar to the PS4′s Jaguar CPU cores in terms of processing power — but the PS4 has eight of them, versus just two in the A8/iPhone 6. 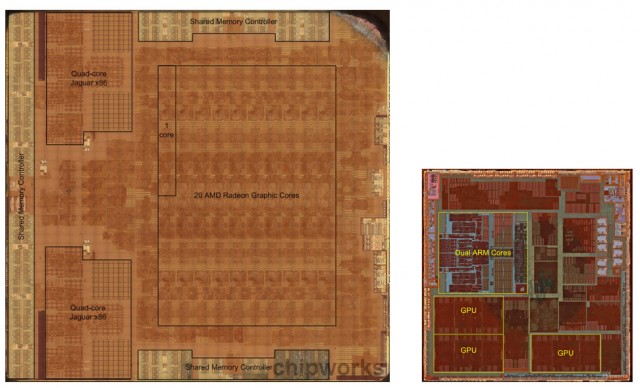 There is one very simple reason for the PS4′s far superior GPU performance: Of the die’s 328 square millimeters, about 230 of that is the GPU. We can only estimate how much die space is taken up by the A8′s GPU, but it’s probably around 30 or 40 square millimeters  – or about one-seventh of the surface area of the PS4′s GPU. It also helps that the PS4 has a power envelope that is around 50 times greater than the A8 SoC, meaning it can use more of its CPU and GPU cores at the same time, for longer periods of time, at higher clock speeds.

In short, if the iPhone 6 was actually “on par” with the PS4 or the Xbox One (which has a very similar APU, transistor count, and TDP), Apple would have to be the greatest chip designers the world has ever seen. It would have to create a GPU that’s capable of 1,840 gigaflops, while still only consuming a few watts. It would have to create a GPU that has a performance-per-watt ratio that’s around 10 times greater than the best efforts of Nvidia or AMD. I’m sure Apple’s chip team is very good — but they’re not miracle workers. (It’s actually Imagination Technologies that makes Apple’s SoC GPUs, but you get the idea.)

Learn More about me here : - http://about.me/psycho_coder